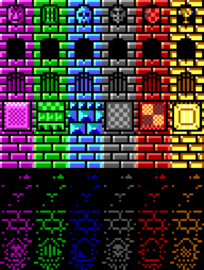 After a long hiatus, we’re finally back with a long post, TL;DR be damned, dammit!

I say ‘we’ rather than ‘me’ because I’m now working with an old and dear friend of mine, Eric. I’ve since moved my old posts from veritastoad.wordpress.com to my own web server, and custom URL.

Eric and I have been friends for nearly two decades, and had collaborated on several projects dating back to my first attempts at video game development some 14 years ago. Dissatisfied, over-educated and unemployed, both of us were looking for a way out of grind. Never has there been a better time for indie game developers to jump in and make great games – we are hoping to follow in the footsteps of the likes of Derek Yu, Scott Cawthon, and Locomalito.

As I’ve lamented previously, I am simply not a “triple threat”, which is to say that I while I am a mediocre artist and a decent composer, I am not a programmer. That’s where Eric comes in – with a degree in Electronic Engineering, Eric has had a lot of exposure to programming (or at least more than I have), and volunteered to try.

We still needed a game engine, and since GameSalad dropped it’s free-to-use model, we sought out other alternatives, eventually settling on GameMaker Studio.

We had a brief false start around June of 2016. Creating graphics confounded me for reasons I couldn’t explain at the time, but now better understand (more on that later). My first attempts at pixel art were terrible, and I simply didn’t know how to go about creating a sprite sheet. While looking for free-to-use artwork to help me get started, I stumbled upon Locomalito’s sprite sheet for l’Abbaye des Morts on OpenGameArt.org, and through that, the game itself.

This lead to us trying out our hands at an unofficial sequel of l’Abbaye des Morts nominally entitled, Monk’s Revenge.Within about 2 weeks, we had a complete design document created, a few level iterations using the original sprites and some modified graphics.

The objective wasn’t to make money but to practice and learn.

Unfortunately, this project was interrupted by my relocation back to the US, and between that and Eric’s workload for his Master’s degree classwork, our progress was mired. When we picked things back up about a month ago, our mutual interest in creating Monk’s Revenge had since diminished in favor creating an original title. We’d learned all we needed to from it, and it didn’t seem worthwhile to move ahead knowing that it would always be shackled by licensing requirements as derivative work.

Instead, we hashed out a new game idea and Eric got to work on the new design document while I delved further into the alchemy of pixel art.

I studied tiles from my favorite 8-bit games growing up, and read up on old graphics modes for IBM Compatible PC’s (what I grew up with) and their limitations. One of Pyxel Edit’s built-in palette sets is “EGA 16” (which is actually the color set used for CGA backwards compatibility): 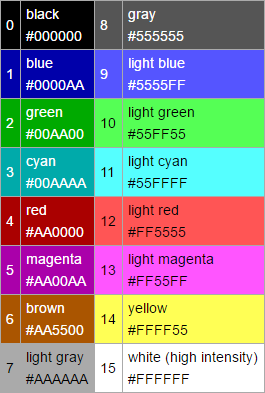 Having a limited set of options forced me to think about how the colors fit together, giving the art a genuine “retro” aesthetic. I started with a simple 16×16 pixel block (enlarged to 64×64 to show detail):

From there, I tried different color combinations and variations: 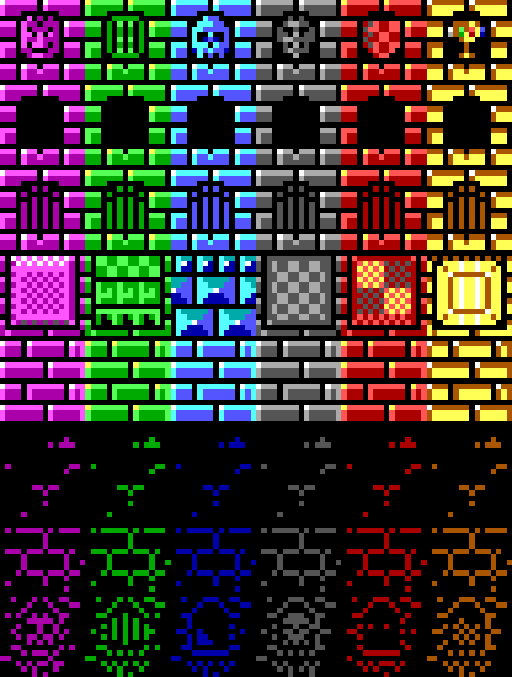 The building blocks of the world(s) we will go on to create were starting to take shape, and my confident in my ability to create pixel art was starting to grow.

Just as important to our new game’s visuals would be the game’s sound and background music. Using only 4 channels and the original NES pulses, noise, triangle and PCM voices, I could some great sounding 8-bit accompaniment for the action:

So there you have it!

So what’s next? Expect more updates as we wrestle with new challenges creating our first game, Beaster’s Dungeon!